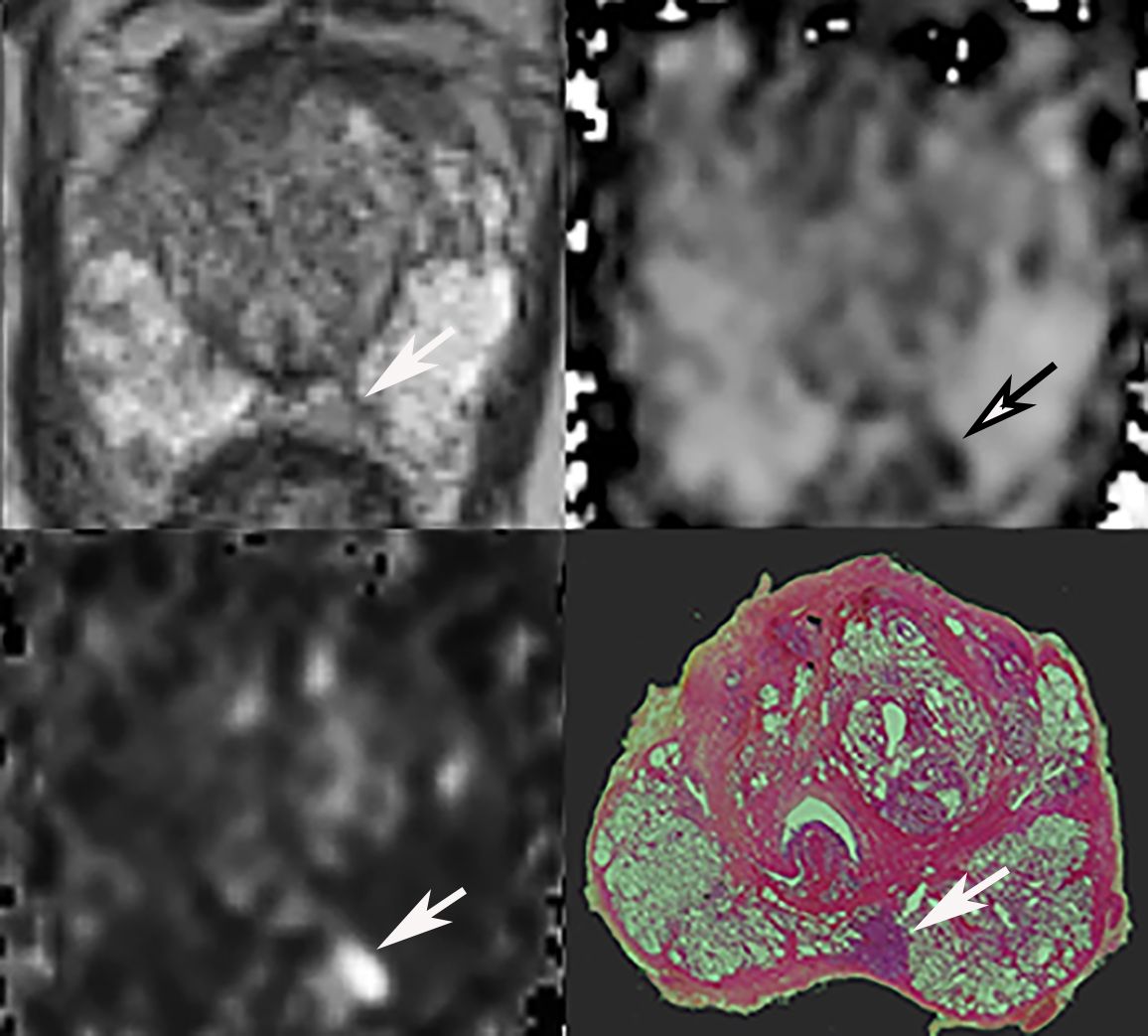 1-The far laterally located tumors missed by the targeted biopsies.

The argument comes from a study on in bore MRI-guided biopsies (2). Far laterally located tumors are sometimes missed by in bore MRI-guided biopsies and more often detected by systematic biopsies. This finding indicates that MRI guidance may not the most appropriate method to guide the biopsy of a far lateral tumor. TRUS guidance should probably be preferred, either visually when TRUS shows the lesion, or with an image fusion system. This alternative may be preferred to the addition of 12 systematic biopsies to targeted biopsies.

2-The prognostic value of systematic biopsies.

According to the authors, prostate cancer prognosis could be more accurately defined by biopsy findings of satellite invisible tumors than those of the index lesion. The authors refer to a study by the journal Nature Genetics (3) which, based on the study of three radical prostatectomy specimens, found potentially pre-cancerous mutations in normal tissue in addition to the index lesion. Therefore, there is no reference to invisible tumors in this research study and it is not clear how the conclusions of the article by Cooper et al (3) could be confirmed by routine systematic biopsies.

3-The pitfalls of prostate MRI reporting.

The argument refers to two limitations: the inconsistent reliability of prostate MRI reporting and the lack of sensitivity of MRI.

Precise MRI reports are obtained from expert centres or individual specialized high-volume prostate MRI radiologists. This situation is source of inequality between urologists who can rely on a specialized radiologist and those who cannot. This can lead the latter to discard MRI and to perform systematic biopsies only. The authors legitimately underline the fact that only specialized radiologists can achieve a consistent reliability. This expertise requires to be trained to prostate MRI (many courses and workshops are available), and to have a reasonably high volume of exams per year to keep the hands on.

The limited sensitivity of the MRI.

The review addresses the poor sensitivity (40%) of MRI for detecting satellite tumors in addition to the index lesion. The authors refer to the series of Le et al (4), but do not mention that the majority of patients in this series had a biopsy before MRI and that satellite tumors were most often missed in patients with biopsy artifacts. This finding considerably decreases the localizing value of MRI to detect satellite lesions. The argument is therefore not relevant.

It should be rather kept in mind that invisible tumors detected by systematic biopsies have a Gleason 3+3 score in 70% of cases (5). When the score is higher, the percentage of grade 4 does not exceed 20% in most cases (6) and tumor volume is most often <0.5 cm3 (7). These favorable Gleason scores have been considered eligible for active surveillance (8), and their detection may thus not significantly modify patient management. From this point of view, the utility of systematic biopsies in addition to targeted biopsies may thus be questionable.

4-The pitfall of targeted biopsy techniques

According to the authors, software based TRUS-MRI image fusion perform better than cognitive biopsies to achieve an optimal accuracy during targeted biopsies. They add that given the cost of software-based systems, the vast majority of urologists are using a cognitive fusion approach.

This statement may be tempered for a reason which is only well known by physicians who have a good experience of prostate TRUS and MRI, using high quality equipments. Once these conditions are met, image fusion is actually rarely necessary. Indeed, once the location of a lesion is known on MRI, a“second look”TRUS, as routinely performed for breast lesions, allows for the detection of 88-90% of posterior PI-RADS 4 or 5 lesions (9). The so-called “cognitive” fusion thus becomes, in the majority of cases, a real-time targeted TRUS-guided biopsy (9). No image fusion system can compete with the performance of a TRUS examination following a high-quality prostate MRI to target a posterior lesion. Conversely, if MRI shows an anteriorly located lesion, it is preferable to use TRUS-MRI mage fusion of prefer an in-bore MRI guidance, given its invaluable precision for targeting anterior lesions (2).

In fact, as acknowledged by Ploussard et al (1), the usefulness of systematic biopsies is largely related to the difficulty for many physicians to become familiar with both MRI and TRUS to optimize the accuracy of targeting during biopsy. With this regard, the reliability of image fusion performed by young non supervised operators has been questioned in the study by Radtke et al (10): 15% of significant tumors visible on MRI were not diagnosed by targeted biopsies and were diagnosed by systematic biopsies. Under these conditions, the usefulness of systematic biopsies can be understood, but it seems preferable to improve targeting accuracy.

5-The safety of systematic biopsies

The authors refer to a review by Borghesi et al (11) to stipulate that the rate of serious complications after biopsy (meaning infectious complications) is the same regardless of the technique chosen (targeted MRI biopsies with or without associated systematic biopsies).

The conclusion of the review by Borghesi et al (11), however, does not fully support this point of view and reports that the rate of infectious complications after systematic transrectal biopsies has increased dramatically in recent years, particularly in patients without cancer (12) and in cases of repeated biopsies, related to a quinolone-resistant strain of Escherichia coli (11). It also increases in older patients or patients with comorbidity (11). Biopsy of prostatic tissue with no MRI abnormality, especially if iteratively performed, could therefore increase the risk of sepsis. This assumption may be supported by the infection rate of targeted MRI-guided biopsies only, which does not exceed 1% (13), although still requiring hospitalisation. An infectious rate of 1%, based on a targeted biopsy only strategy would be considered more acceptable than the current rate of approximately 3-4% observed after systematic biopsies (12).

Ploussard et al. finally state that the prostate biopsy policy in case of suspicious MRI should not be in accordance with the general rule in oncology which consists in using imaging to find the target and guide the biopsy. If the authors recommend to derogate from this basic principle and to add systematic to targeted biopsies, they express their legitimate fear of missing significant tumors. However, the main reason is that expertise is lacking to consistently take the best shot during biopsy, meaning that the profile of the expert remains to be defined.