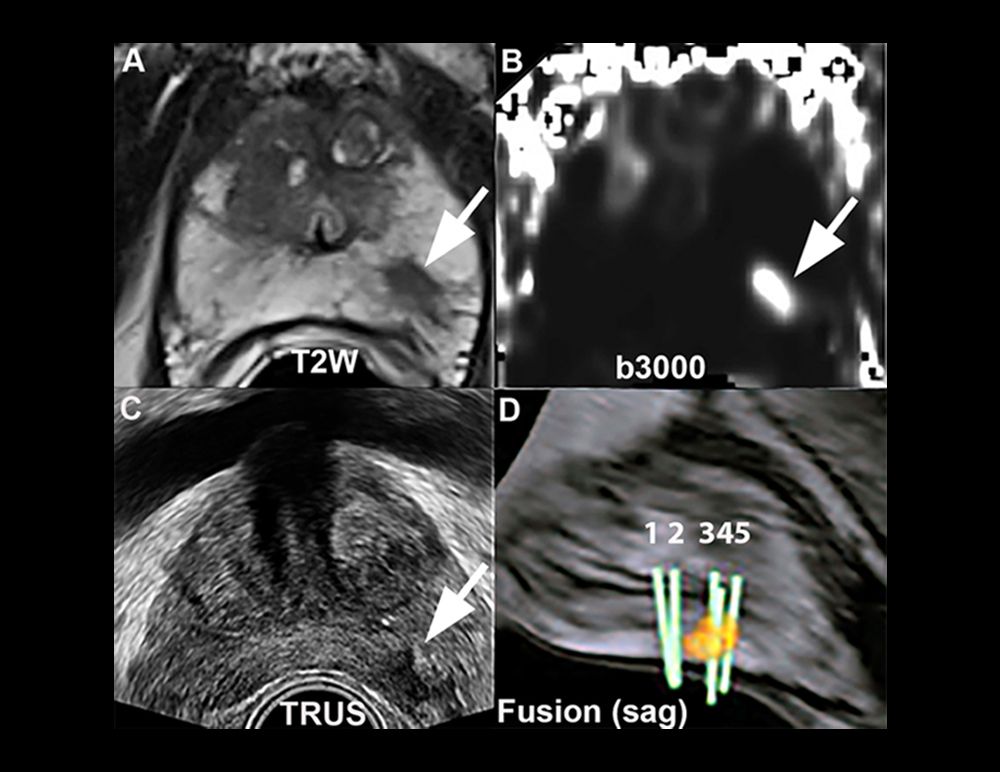 In all, six targeted biopsies were performed, the primary objective of the study being to determine the detection rate of significant cancers, defined by a Gleason score >3+4 or a maximum cancer core length >5mm. The aim of the study was to  evaluate the detection rate by the three software-based biopsies, by the three cognitive biopsies and by the 6 combined biopsies. The overall detection rate by the 6 biopsies was 72% (93/129). Each of the two fusion techniques diagnosed 13 cancers (13/93, 14%) missed by the other. The conclusion of the study was that the two techniques should be combined. The statement remained valid if less strict definitions of significant cancer were used.

This conclusion can be viewed from another angle and it may be argued that the way the authors use MRI-TRUS image fusion is not optimal.

the 13 cancers missed by the cognitive fusion

This type of biopsy is called either cognitive or visual by the authors. However, the two terms do not mean the same thing. A biopsy under visual ultrasound guidance samples a lesion which is by definition detected on TRUS, when performed after MRI. A cognitive biopsy is directed to an TRUS area presumed to correspond to the MRI lesion. The visibility of the lesion on TRUS is not considered.

The authors therefore do not take into account the performance of a second-look TRUS, consisting in performing, as for breast imaging (2), TRUS after MRI to localize the target, sometimes with the help of the fusion system (3). One can regret that the authors did not use the performance of the high-quality TRUS equipment connected to the SmartTarget software. Once the operator’s expertise is available, this type of TRUS equipment can detect nearly 90% of posterior (3)lesions, when the involved sector is known by MRI. In addition, TRUS visibility is associated with the presence of high-Gleason grade cancers (4).

Once these findings are admitted, it is easy to understand  that no fusion system can compete with the accuracy of two TRUS guided biopsies of a visible lesion. Not considering the value of a second-look TRUS can therefore explain the high 14% false negative rate of purely cognitive biopsy. A similar rate was noted in our study performed with a less performant TRUS equipment than the one used by the authors (5).

The 13 cancers missed by the image fusion software

The accuracy of MRI-TRUS image fusion is considered acceptable, with a mean image registration error of 3-4 mm, as with the software used by the authors (reference 5 in article). With other fusion softwares, the registration error can exceed 5 mm in 25% of cases (6)(figure 1). The computational constraints of MRI-TRUS image fusion are therefore a source of incompressible targeting error, reflected by an additional high 14% false negative rate reported by the authors.

The 6 biopsies required for each target

To overcome the limitations of the MRI-TRUS image fusion technique used in the article, the authors have no other solution than to advocate an oversampling using the cognitive and software based image fusion. This strategy does not seem to represent the most elegant solution to reach a target during a prostate biopsy. It may be recalled that one or two samples are sufficient during an inbore MRI guided biopsy to consistenly diagnose significant cancer (7).

This study deprives itself from taking advantage of using the same imaging modality to both localize and sample the target, to ensure an optimal accuracy during prostate biopsy. The authors may consider that a second look TRUS has in fact rehabilitated the localizing value of TRUS (8) and the promising results of very high frequency TRUS (9) reinforce the idea that “seeing” a lesion before biopsy makes image fusion superfluous during sampling. In bore MRI guided biopsies are governed by the same principle : using the same imaging modality to both locatize and guide the biopsy, with the recent aid of a robotic assistance (10). The optimal reliability of an image-guided prostate biopsy will probably require the acquisition of expertise in prostate imaging, including MRI and ultrasound, opening the way to an alternative to MRI-TRUS image fusion.

Caption Figure 1 :  Value of a second look TRUS. 69-year-old man, with a raising PSA level (6ng/ml) . The lesion is clearly visible on T2W (arrow, A), on DW images (arrow, B) and is well localized by TRUS (arrow, C). Biopsies 1 and 2 (D) were performed in the visible nodule on TRUS and showed a Gleason score 3+4 cancer with 30% grade 4 and a maximum cancer core length of 6mm. Biopsies 3,4,5 (D) were performed in the target obtained by image fusion (yellow tag) and showed a Gleason score 3+3 cancer with 1 mm of maximum core length. Visual guidance was proved to be more accurate than image fusion.