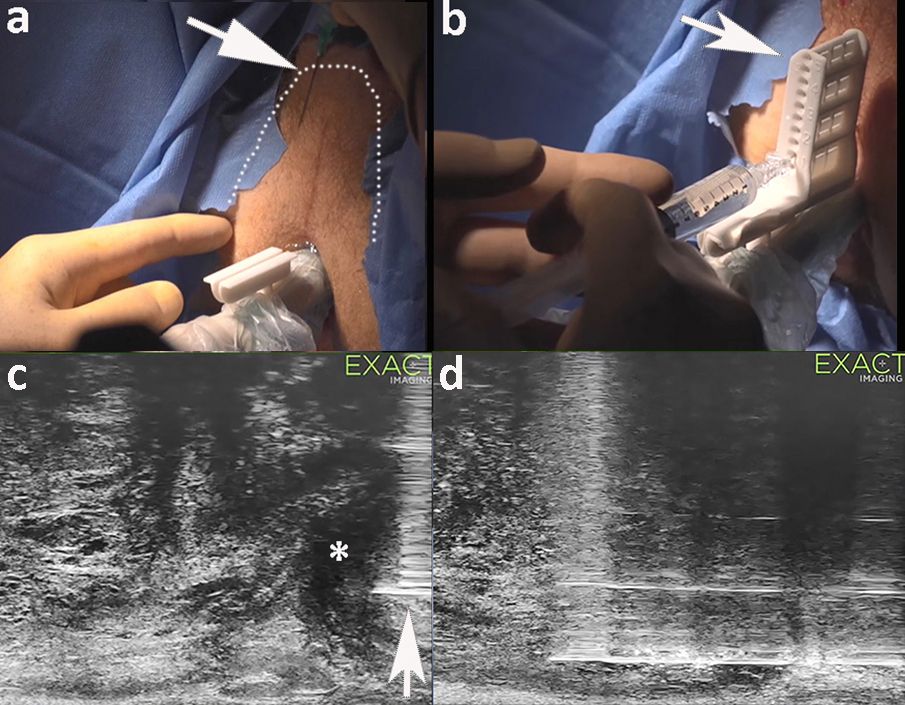 The meta-analysis does not mention that SB are positive, in at least half of the cases, in the target area, which questions the accuracy of TB, whatever the technique used. The imaging modality used to guide the needle pathway should ideally “see” the target at the time of biopsy. This is possible if real-time MRI guidance is used 2. It is also possible to use a conventional endorectal ultrasound probe equipped with a very high-quality B-mode. Which can localize PI-RADS 4-5 lesions originating in the peripheral zone (PZ) in 85-90% of cases, with the help, of a real time navigation system in selected cases3. It is even now possible to use a 29MHz linear array (Exact Imaging, Canada), also known as micro-ultrasound 4,5, which provides a spatial resolution never achieved until now for the prostate. When used as a second look modality (once the location of the lesion is known on MRI), this new technology may localize PZ lesions, whatever the PI-RADS category, and lower TZ tumors in virtually 100% of cases6. A navigation fusion system is available if the tumor is not well displayed on microUS (figure 1). 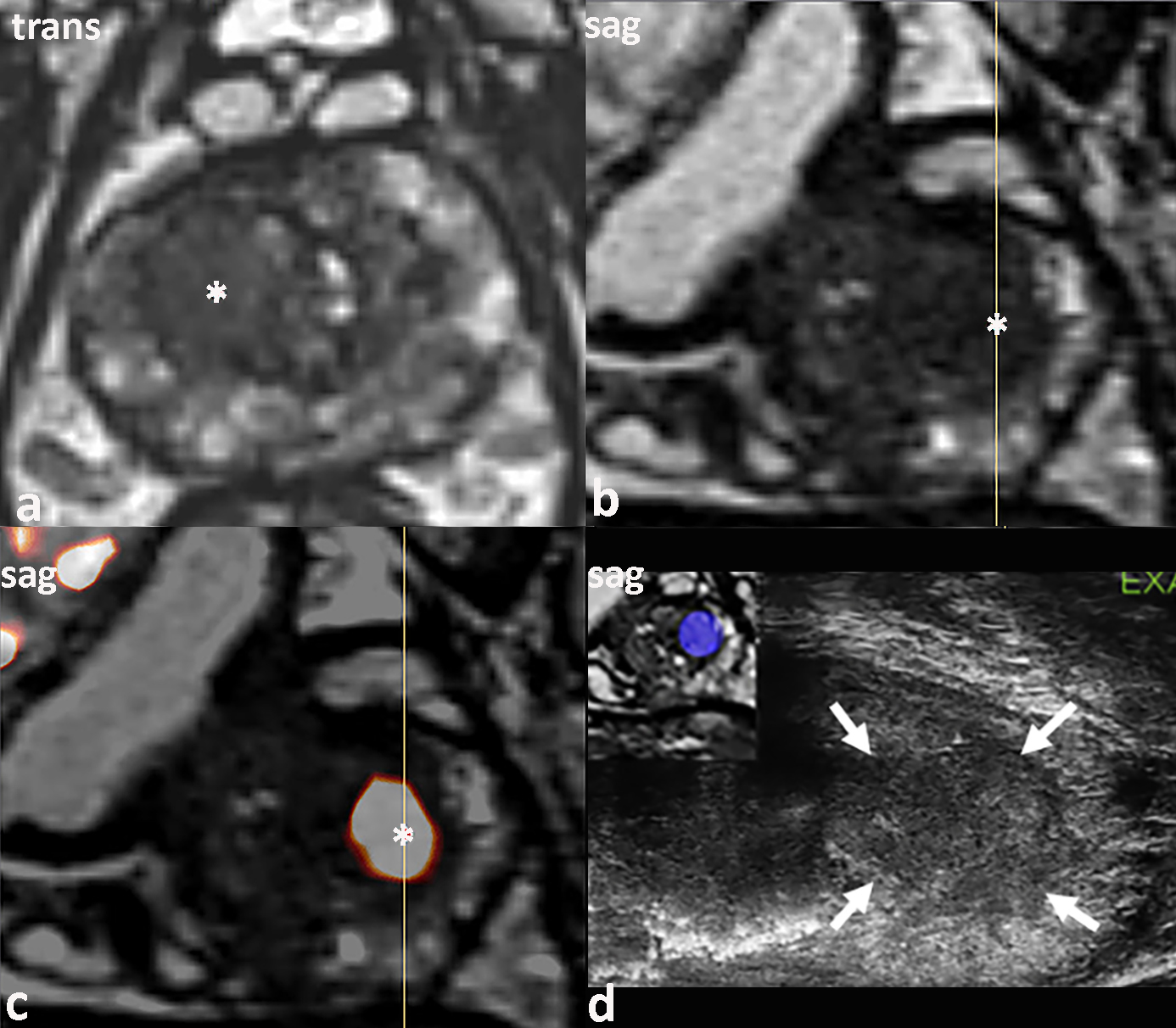 There is actually more and more evidence that TB, whatever the technique used, should sample the target and its vicinity (“penumbra” 7) and SB far outside the lesion may be discarded.

It should also be noted that this meta-analysis is published at a time where the transrectal route is increasingly being questioned, given the septic risk it entails. The septic risk of the transrectal approach has been more and more often denounced these past years. More than one million prostate biopsies are performed in Europe and the United States every year. Fever or chills are observed in more than 10% of cases and a serious infection in 1-2% 8. One case of death has been reported in a Norwegian study 9, which warned that the resistance to antibiotics steadily increased and predicted that it will quadruple in the coming years. For some authors, the transrectal route is becoming untenable 9 and the routine use of rectal culture swabs prior to any transrectal biopsies is strongly encouraged to detect a quinolone-resistant germ 8.

The alternative is transperineal biopsies (TPB), initially done under general anesthesia to perform saturation biopsies. Now, local anesthesia is acceptable 1 (figure 2), with a conscious sedation in selected cases. The major advantage of TPB is the absence of infection, and the prophylaxis is done by IV injection of cepaholosporin 30 mn before the biopsy, avoiding the risks of the resistrance to quinolones. 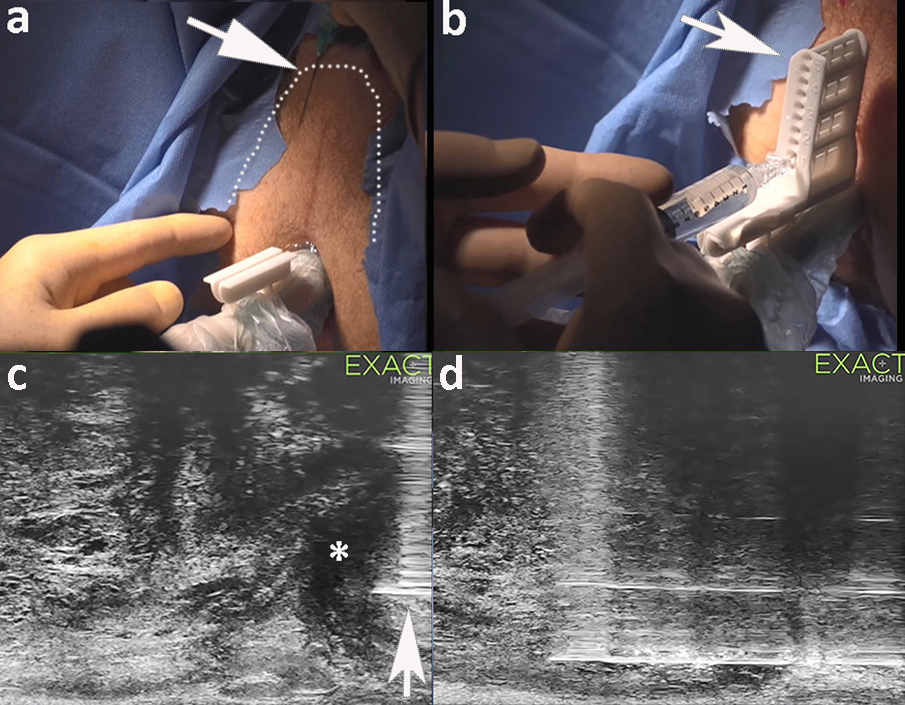 Figure 2 :Transperineal systematic biopsies in a 65 y/o man with a raising PSA. MRI showed no focal lesion. Local anesthesia (arrow, a),is first done subcutaneously covering a horseshoe shaped area (dotted line). The needle guide (arrow, b) is then positioned and used for the periprostatic anesthesia (arrow, c). Local spread of the lidocaine (asterisk, c) is followed in real-time. The needle biopsy (d) follows a cranio-caudal route when the biopsy device is activated, allowing for an optimal amount of PZ or TZ sampled tissue, when compared to a transrectal biopsy. A standard transperineal biopsy scheme includes 11 cores and can be increased to 20 cores if the TZ needs to be sampled.

It can be expected that the transperineal approach and a target+penumbra biopsy policy under local anesthesia will gain a more widespread acceptance in a short future.